Hamstring Injuries and how to treat them.

Last week in clinic an elite level sprinter visited Jon for advise on a suspected hamstring injury. This is a very common injury he sees in footballers and track athletes so he will use this case study to discuss the best management for hamstring tears.

Where are the Hamstring muscles and why are they important?

The hamstrings are a highly complex system of large muscles positioned at the back of the thigh. There are actually 4 separate areas of the hamstring muscles as shown in diagram below.

They are very important for any sports that involve fast explosive sprinting activities. The most important function of the hamstrings is actually to slow down the leg as it is accelerates forward by the strong quadriceps muscles. Not just bend the knee as commonly described in rehabilitation videos. This has very important implications when it comes to rehabilitation exercises as described later.

The most common scenario Jon sees in clinic is the patient describes instant severe pain often combined with an audible popping sound during a sprint movement.

The most common areas to develop pain are one of 3 regions as shown by arrows below: 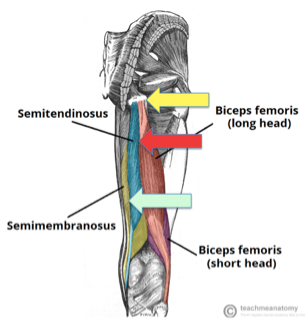 What to do in the initial stages?

If there is a lot of bruising within 72 hours then it is advisable to get a scan on the injury in order to accurately diagnose the grade of tear and predict the likely time out of sport. Ultrasound scans are excellent for detecting muscle tears and can help predict return to play times.

This website uses cookies to improve your experience while you navigate through the website. Out of these, the cookies that are categorized as necessary are stored on your browser as they are essential for the working of basic functionalities of the website. We also use third-party cookies that help us analyze and understand how you use this website. These cookies will be stored in your browser only with your consent. You also have the option to opt-out of these cookies. But opting out of some of these cookies may affect your browsing experience.
Necessary Always Enabled
Necessary cookies are absolutely essential for the website to function properly. This category only includes cookies that ensures basic functionalities and security features of the website. These cookies do not store any personal information.
Non-necessary
Any cookies that may not be particularly necessary for the website to function and is used specifically to collect user personal data via analytics, ads, other embedded contents are termed as non-necessary cookies. It is mandatory to procure user consent prior to running these cookies on your website.
SAVE & ACCEPT